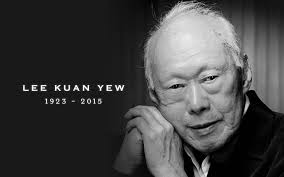 This whole week has been an emotional one watching our country mourn the passing of our founding father Mr. Lee Kuan Yew.
As a kid growing up in the 1970s and 1980s, I remember my parents talking about the stop at two policy when I asked why did they not have another kid (there’s just me and my brother)! And we were of that generation where the bilingualism policy of learning our Mother Tongue was in place in education. I used to wonder why my cousins could all learn Malay but I had to learn Mandarin, a language that I struggled with constantly throughout my schooling years given the English speaking background I grew up with.
On hindsight, I now appreciate the bilingualism policy that Mr. Lee put in place. Whilst English may be lingua franca, being able to communicate in Mandarin or Bahasa for business or even socially has been a tremendous advantage.
My parents belonged to the generation that saw Mr. Lee and his team build this nation. They lived through the time when this country faced the  Japanese Occupation and the race riots and tension of the 1960s. For them, Mr. Lee has been instrumental in taking our country to a first world nation status.
So on 29 March 2015 at 12 noon, my father and I stood along the roadside to witness the funeral procession. The heavens opened and it poured. But everyone braved the rain. I saw strangers helping each other: a lady offering to hold the umbrella for another woman so that she could help her husband hold up the large state flag. Volunteers giving out water and little state flags for us to wave at the cortege. And the policemen who stopped traffic once the procession passed so that we could all cross the road safely and avoid congesting the connecting bridge at the MRT station.

In moments, as the funeral procession approached, people started shouting “Lee Kuan Yew”. The cortege passed and it was over. It was a poignant moment. And then in silence, the crowd dispersed quietly.

This past week as I reflected on what we have achieved as a nation through the sheer single-mindedness, vision, leadership, tenacity and commitment from this one man, I also can’t help but wonder at our future. As an entrepreneur and business owner, I appreciate and am deeply grateful of the open, honest and transparent business environment that this man’s legacy has created. Having said that, the twin challenges of high operating costs and labour crunch that small businesses face in recent years is something that will need to be addressed urgently if Singapore still wants to retain its competitive edge.

I can only hold onto the belief that the Government and the people of this country will continue to uphold the values of meritocracy, integrity and responsibility that Mr. Lee stood for.

Farewell Sir. May you rest in peace.